One cannot speak of the history of Pollock Pines and the surrounding area without mentioning the Blair family. The Blair family can be distinguished as continuously contributing to the development of the area from the beginnings of the gold rush up to the present time, first as innkeepers, but also as lumbermen, and ranchers.

About 1850 the four Blair brothers migrated from Scotland, settling in Ohio. John had come first with the rest to follow. The news of the gold discovery sparked their interest and again John was the first to come west, this time to El Dorado County. The brothers would follow when enough money could be raised. James was the next to come to El Dorado County with Matthew, the oldest, and Robert coming after him. John had preempted 160 acres of land on the ridgetop 11 miles east of Placerville on the emigrant road to Carson Valley. He then purchased the adjoining 160 acres which included Sportsman’s Hall. When James arrived, John was already in the hotel business and together they became involved in operating one of the most important and most popular stops for stages, freight wagons, and riders on the road. It was also a home station for the Pony Express. Robert later joined them in the hotel business.

The Blairs diversified their interests by going into the lumber business. There was great demand for virgin Douglas fir lagging to shore up the mines. These timbers were 4 feet long, split in bolts 3 to 4 inches thick and 7 inches wide. Lumber was also needed for buildings for the hastily increasing mining towns.

The original Blair’s Mill operated by John and James Blair was located near Five Mile House in 1856. It was a steam powered mill and could cut between eight and ten thousand feet of lumber per day. The second mill, called Elkhorn Mill, was set up at the head of Iowa Canyon in 1860. Iowa Canyon starts just after crossing the narrow bridge across the ditch going northeast on Blair Road. A tram for transporting lumber ran from this mill to drying decks across the road from Sportsman’s Hall. The track bed, though overgrown, can still be found.

Matthew had taken over operation of this mill. One Sunday in 1867, he was cleaning out the tail of the mill. The water had washed a channel in the sawdust 15 feet deep. The sides of the channel caved in, suffocating him. He was found under the sawdust the next morning with his dog lying nearby. He died at the age of 41. His son Matthew had spent many hours at the mill playing with the indian children of the area. He often told the story of the indians stripping back the bark on a dead log and popping the white grubs into their mouths. The grease would run down their chins. Blair Harris, grandson of Matthew the younger, said there are many indian grinding rocks in the area. He also related the story of Deadman’s Springs. One hot summer day in the mid 1860’s several loggers were driving ox teams from the logging site near what is now Forebay Lake, to Elkhorn Mill. They stopped at a spring just northeast of the mill on Blair Road to get a drink of the clear icy cold water. By the time they reached the mill, some of the men had died from the extremes of the heat of the day and the cold water. In the early logging days it was easier to move the mill to the logging area than to bring the logs a long distance to the mill. Sometimes horses but more often a 12 bull ox team was used to pull a heavy, steel rimmed, wooden wheeled logging wagon. When the logging operation was close to the mill, logs could be skidded down the hill in a wooden chute or track or pulled uphill by cables attached to a steam donkey engine. There was not enough water for ponds so the logs were dry decked. The area surrounding a mill would be logged off in about 10 years, consequently, the Blairs moved their mill sites about every 10 years. Other major Blair Mill sites were: 1870 to 1880 – South Long Canyon, 1880 to 1890 – North Long Canyon, 1890 to 1908 – Sly Park Mill, 1908 to 1910 – Plum Creek Mill, 1911 to 1912 – Fresh Pond Mill, 1913 to 1925 – Long Canyon out Old Blair Mill Road, 1927 to 1948 – across the canyon from Pacific House. J. and J. Blair operated the mills prior to 1890. Sioli states in his book on El Dorado County that the Blairs in 1883 had three mills: Elkhorn Mill, Sportsman’s Hall Mill, and Cedar Rock Mill, as well as a lumberyard at Placerville. He also states that they had box factories connected with their mills that manufactured large amounts of rough cut box lumber for the fruit trade.

James B. Blair, son of James, operated the Sly Park Mill in the meadow now inundated by Jenkinson Lake. This was a large operation and according to the Mountain Democrat of May 14, 1904, “J. & J. Blair have just installed a 160-horse power Dolbeer patent logging engine at their mills at Sly Park. Another boiler has also been put into their saw mill at that place, as this season promises to be very busy.”

In 1901 and 1902 Matthew E. Blair Sr., son of the older Matthew, cut lumber for the El Dorado Deep Gravel Mining Company at Ditch Camp Mill at Silver Fork. Lumber from this mill was transported by flume approximately fourteen miles to the present day Pollock Pines area. Fresh Pond Mill was run by Blair brothers, Walter and Arthur J., and they were joined at Long Canyon by Matthew E. Blair Jr. and Albert Blair. These four partners also operated the mill at Pacific House. The Blair Brothers had timber holdings across the canyon from Pacific House and it was necessary to build a bridge across the South Fork of the American River to get to the timber and build the mill there. These timber holdings were sold to the Michigan-California Lumber Company in 1958, and the Blair Brothers Lumber Company then concentrated their efforts in the retail lumber business in Placerville until it sold it 1985. The end of the Blair Brothers Lumber business had come, but many landmarks still carry the Blair name. Many of the Blair descendents are still actively engaged in business in the area. The Combellacks of Placerville and Bert and Blair Harris, who own and operate Harris Christmas Tree Farm on Blair Road in Pollock Pines are some of these descendents. Bert and Blair are descendents of Matthew, the oldest of the four Blair brothers from Scotland. They own and operate the Christmas tree farm and Apple Hill orchard on the site of the original Elkhorn Mill where their great grandfather died. The Harrises continue to contribute to our local economy as did their ancestors before them.

Photo Gallery for The Blair Family 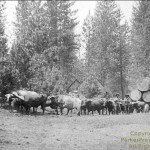 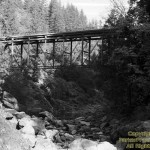 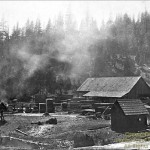