My mother never knew her father or his history. Her father left her and her mother when she was 2 years old. She didn’t know why nor where he had gone. She never heard from him again. Her mother soon left to find work and my mother was left to be raised by her grandmother and step grandfather. She was a lonely child and always longed for brothers and sisters.

Her mother eventually remarried but never had more children.

When my mother retired, she and Dad sold their home and stored their memories in boxes with us children and took an extensive trip across the United States.

Being of a curious nature, I was looking through the boxes one day and found the marriage license of my mother’s mother and natural father. It was an exciting discovery. Without delay I rushed to the phone and called the operator of the small town in which they were married and asked if she would give me the names, phone numbers and addresses of all of the Shermans in the town. I told her of my discovery and how excited I was to find my mother’s father. The operator was very cooperative and gave me several names.

I soon called or wrote every one and found a sister to my grandfather. He had died several years earlier, ironically, just a few months after my grandmother.

My new found Grand Aunt was delighted to be found and told me that my grandfather had returned home, remarried and had four more children. My mother had brothers and a sister after all. My grandfather had never spoken of what had happened or why he had left his first family.

When my mother and father returned from their trip, she was overjoyed with the news and planned a trip back to see her new family.

It turned out to be both a joyful and a sad venture as they had a marvelous, tearful, extended family reunion. While there, my mother had a heart attack and died. Not however, before she had realized her three lifelong dreams: Seeing her six children grow to be happy, productive adults; visiting New England in the fall; and having siblings.

Needless to say, I was hooked on family history and have been doing it ever since.

When my sons were older and I became a Cub Scout Den Leader, one of the badge requirements was to learn something about local history. We went to the local library and the library and museum in Placerville. We always received the same response. “Pollock Pines has no history. There was really nothing there.”

I knew that wasn’t true, so I dug and delved and pulled bits and pieces together. I talked to a lot of people who had been in the area a long time, looked through many books, and visited many agencies.

I had never been interested in history when I was in school, but I had always loved reading historical novels. Now the local history was becoming like a family history, or historical novel. It was becoming a part of me because it related to me personally. I was part of this town’s history. My husband and I lived here with our children. Our friends were here. Our children were growing up here and attending school here. Our memories were being made here. It was also easier to research than family history, because it was local.

I am not a historian, nor even a writer, but felt that I should record some of the information I have found so that all of my notes would be available to others.

This book is my effort to record this information. Much of it has been told to me by others as they remembered it. History is often recorded according to the eye of the perceiver. I would appreciate any new perceptions or additions to the information contained herein and perhaps someday will add them to the text. Cub Scout Troop 104, in front of the building that became The Haven restaurant. 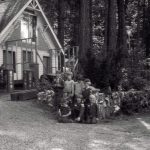